Support4Yachts has more than 40 years experience in the marine and yachting industry and understand the regulations, difficulties and challenges faced by yacht owners, captains and operators.

Support4yachts has designed and built a web based application (S4Y) specifically designed for use by iPads and laptops as well as Android portable devices and allows owners, captains and managers of yachts to manage a yacht's operating and safety procedures in a secure, efficient and paperless environment. The application allows multiple users access to the yacht's latest procedures as well as logs of all completed checklists, forms and drills.

We also offer the following services

A Mini-ISM is a safety management system based on the ISM Code but tailored specifically to the needs of commercial yachts over 24 meters and under 500GT which otherwise, under international maritime law, have to comply with a full ISM system.

All commercially operated yachts under 500 gross tonnage must design and implement a SMS which adheres to all regulations and standards issued by international bodies such as the International Maritime Organisation (IMO) as well as local governments and private bodies such as classification societies and flag states.

The Support4yachts ISM and checklists are delivered as a web application as either standard or bespoke documents that allow approved users the ability to control vessel or fleet safety management systems anywhere. This offers a structured, paperless and auditable way to demonstrate due diligence in managing the owner’s valuable asset and safeguarding the lives of those on-board.

The purpose of a Mini-ISM is to:

The International Convention for the Prevention of Pollution from Ships (MARPOL, short for Marine Pollution) was adopted in 1973 and entered into force ten years later. All yachts, whether commercial or private, must comply with MARPOL, where applicable.

It contains regulations designed to prevent pollution of the sea, land and air caused accidentally or during routine operations by ships transporting oil cargoes, by noxious or harmful cargoes, and by sewage and garbage. It also aims at cleaning up the oceans. It contains requirements for storing, treating and discharging of the above-mentioned substances as well as procedures for reporting of incidents involving dangerous goods, harmful substances and/or marine pollutants. The convention includes the following six annexes:

The original MARPOL Convention 73 together with the 78 Protocol is collectively known as MARPOL 73/78.

The Support4yachts web application provides users with the ability to manage all MARPOL requirements in a structured, paperless and auditable way online and offline.

SOPEP in itself is a guideline for the response of the vessel’s crew in case of oil pollution and how to report, who will be reporting and what should be reported. It also gives a guideline to control discharge action - with consideration based on Navigation Measures and Seamanship Measures.

All superyachts, whether commercial or private, must comply with the International Convention for the Prevention of Pollution from Ships (MARPOL, short for Marine Pollution).

The Support4yachts web application provides users with the ability to manage all SOPEP requirements in a structured, paperless and auditable way.

From 1 January 2013, there is now a mandatory requirement for all yachts that are 400GT and over to complete and maintain a Ship Energy Efficiency Management Plan (SEEMP).

In its simplest form, and for the purposes of port state control inspections, a SEEMP is simply a set of documents that demonstrates that the vessel has reviewed and has a plan for improving energy efficiency. For superyachts, the plan might include, for example, sections on engine tuning and monitoring, hull and prop condition, reduction of auxiliary power, reduction of speed, trim and draft, and voyage execution and routing.

The Support4yachts web application provides users with the ability to manage all SEEMP requirements in a structured, paperless and auditable way. 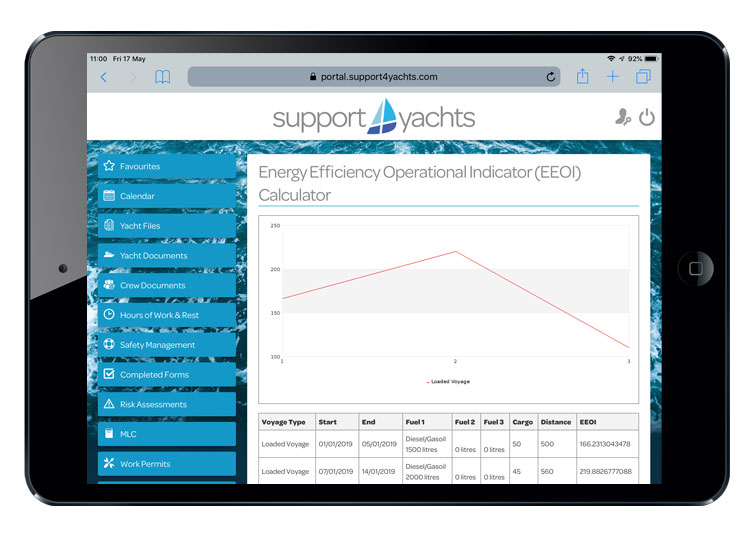 Our experience is invaluable in ensuring that ISPS (International Ship and Port Facility Security Code) for yachts is interpreted correctly and applied to the superyacht’s Ship Security Plan (SSP) in a user-friendly and efficient manner that works on board.

Our ISPS service for superyachts consists of two stages:

The yacht’s SSP will be developed in conjunction with the Captain and crew, taking into account all relevant international and national legislation and will form part of the overall ship security system.

In addition to our pragmatic and experienced approach to ISPS Code implementation on board large yachts, we provide the following:

The Support4yachts web application provides users with the ability to manage all SOPEP requirements in a structured, paperless and auditable way.

On 1st January 2013 MARPOL Annex V requirements for the prevention of pollution by garbage from ships entered into force. The new Annex requires that the discharge of all garbage into the sea is prohibited, except as expressly provided otherwise.

Additionally, Regulation 10.2 of Annex V will require that every vessel of 100 gross tons (GT) and above, and every vessel certified to carry 15 or more persons have a Garbage Management Plan. This lowers the tonnage requirement from its current level of 400 GT, which will have implications for a large number of smaller vessels such as offshore supply vessels (OSV), tugs, and yachts.

On 7 February 2006, the ILO, a United Nations agency, established the Maritime Labour Convention (MLC 2006). According to the convention, all commercial ships over 500 GT trading internationally will require a Maritime Labour Certificate and a Declaration of Maritime Labour Compliance. The convention will also apply to ships below 500 GT or those operating on domestic trades (within the flag’s territorial waters) but will not require certification, only inspection.

The convention is now ratified and shall come into force in August 2013.

Shipowners will be required to develop and carry out the requirements of the convention as ratified within the regulations of the flag state. The purpose of MLC 2006 is two fold; to reduce accidents at sea and to protect the rights of the seafarer. The main features covered by the MLC 2006 are: safe and secure working conditions, fair terms of employment, proper living conditions, medical care, hours of rest, recreational facilities, food and catering and welfare and social protection.

For most shipowners, the convention should not alter normal operational standards and procedures as most procedures are already in compliance and only slight changes may be required to comply with protocol of the convention. Shipowners concerned about compliance and requirements can approach their classification societies who are now making a diligent effort to assist shipowners with the requirements to ensure compliance is done at an early stage. The company’s or yacht’s safety management system (SMS) is at the core of compliance with the new convention. It is likely that the new procedures, policies and records of compliance will need to be incorporated into the SMS, especially as this is required for evidence of on-going compliance.

The certification will be subject to revalidation every five years, with mid-term assessments of the quality of the compliance onboard. It will also form part of future port state control inspections. The issue of a Maritime Labour Certificate to a ship is evidence that the ship complies with the requirements of the convention and meets the flag state’s approval for seafarers’ living and working conditions onboard.

The DMLC is attached to the Maritime Labour Certificate and is completed by both the flag state and the shipowner.

Shipowners will be held responsible under the convention for certain liabilities incurred by the seafarer, ranging from injuries and compensation, to repatriation. Many of these requirements are already shouldered by shipowners. P&I club cover may include some of the liabilities arising out of the convention, however the owner remains liable for these claims even if they arise from war, terrorism, insolvency or bio chemical attack. In these circumstances club cover is currently either limited or not available. Owners will be required to provide evidence of financial security for these claims. Under the MLC owners will be liable for crew repatriation as a result of business insolvency and claims for unpaid wages. They will also be required to provide financial security for such abandonment claims. There will be a right of direct action against the financial security provider for the cost of repatriation and reasonable expenses incurred by the seafarer from the time of abandonment until the time of repatriation and outstanding wages and other contractual entitlements, limited to a period of four months. Currently there is no P&I club cover for these claims and the clubs will not provide the requisite financial security, as this would be a guarantee for an owner’s financial default.

The Maritime Labour Convention, properly implemented, will provide a comprehensive set of maritime labour rules to protect Seafarer rights to a safe working environment, to healthy conditions and appropriate training.

The Support4yachts web application provides users with the ability to perform a GAP analysis and be supported toward their achievement of compliance and ongoing maintenance of this compliance in a structured, paperless and auditable way.

Your enquiry has been sent.